Calling all students of history, government, law, public policy, international relations, and other interested members of the public – help us expand access to hundreds of previously unreleased legal reports and other publications from the Law Library of Congress dating back to the 1940s!

We are excited to launch our second crowdsourcing campaign with By The People, entitled Historical Legal Reports from the Law Library of Congress.

A major function of the Law Library of Congress is the preparation of reports on legal topics, with an emphasis on foreign, comparative, and international law, in response to requests from Congress, the executive and judicial branches of the federal government, and others. The Law Library has authored thousands of reports from the 1940s to the present, many of which are available through the Library’s print collection. Recently, the Law Library began a multi-year effort to digitize and publish some of our previously unreleased historical reports in order to make them fully accessible to researchers and other members of the public. Although this phase of the crowdsourcing campaign includes only a sample of the recently released reports, you can also browse the latest collection of digitized historical reports here in the Library’s digital collections framework.

Reports in this campaign include recently digitized reports covering a wide range of legal topics from regions across the globe. The reports in this phase of the campaign mostly reflect legal research and analysis from the 1960s-1980s, with some exceptions. Broken down into 24 projects, such as Civil and Human Rights, Intellectual Property, and Constitutional Issues, there is something for everyone in this collection. We hope to release many more historical reports through this campaign in the coming years. 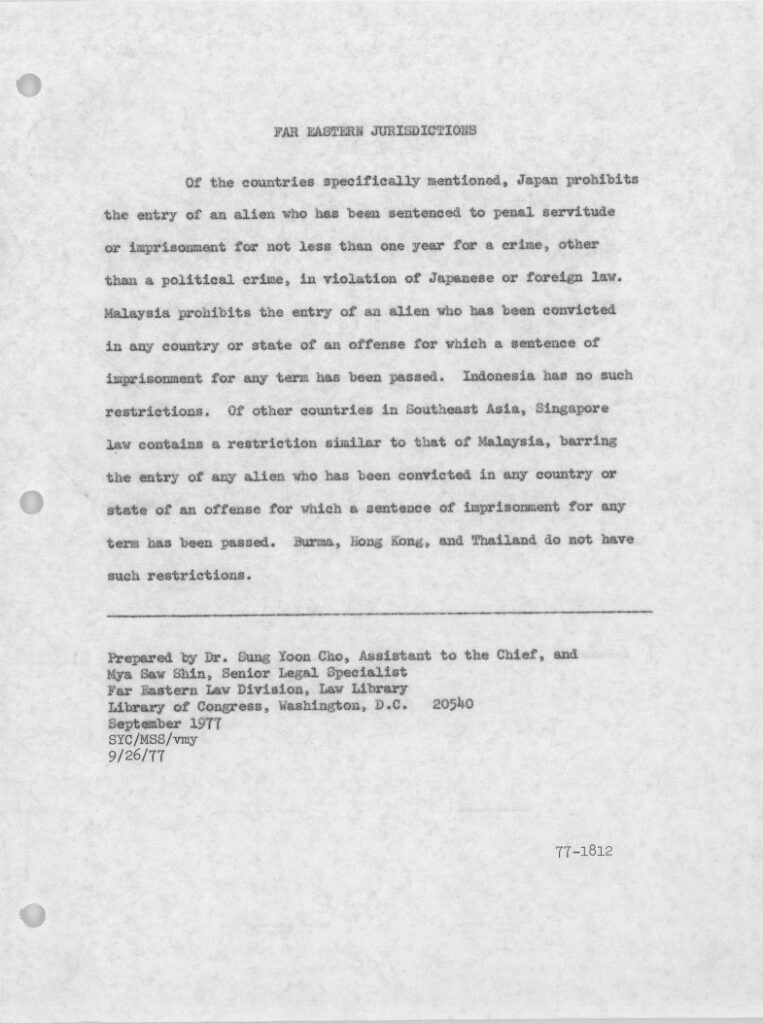 Far Eastern Jurisdictions: Restrictions on Entry for Aliens Convicted of a Crime. From Immigration, Nationality, and Citizenship. Washington, D.C.: Law Library of Congress, 1977.

Not only do these reports give us a glimpse into the past, they also cover legislation from all over the world. The document below, under the project Travel Requirements, Visas, and Foreigners’ Rights, was prepared in 1971 by a senior legal specialist and explains what visas were issued for travel to Burma in 1966. If travel is not your interest, check out our section on Political Activity and Political Parties, where you can find several countries’ laws pertaining to the Communist Party as well as the political activities of government and military personnel. 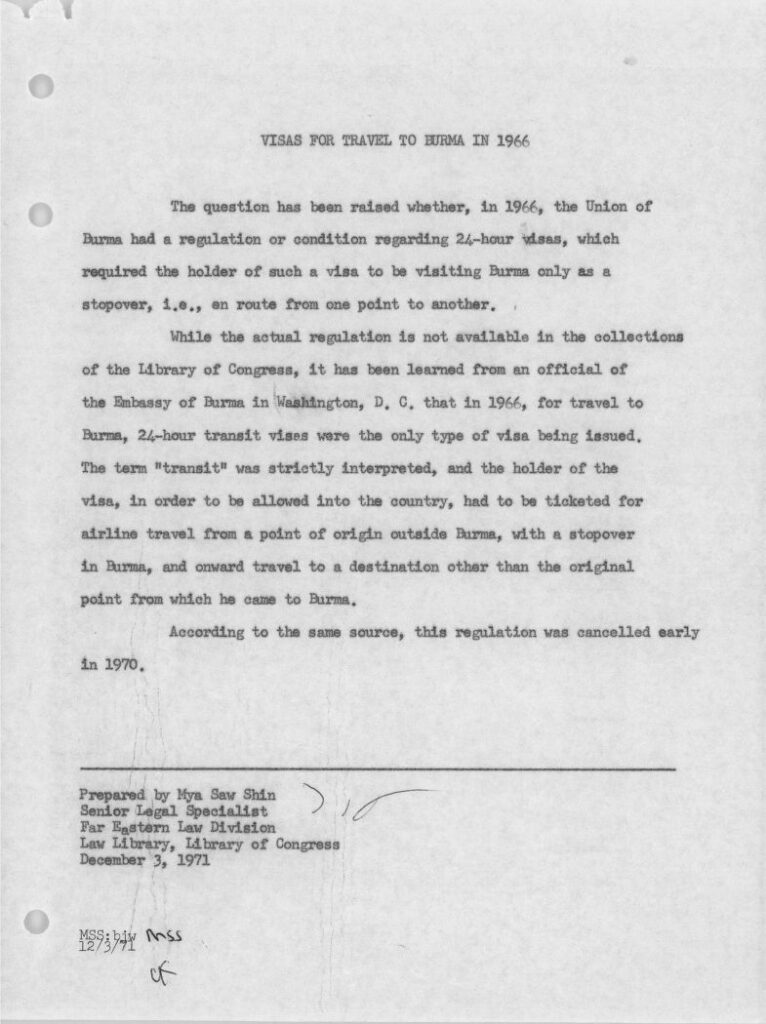 Visas for Travel to Burma in 1966. From Travel Requirements, Visas, and Foreigners’ Rights. Washington, D.C.: Law Library of Congress, 1971.

Many of these newly available reports have been digitized from thin, carbon copies and have not been found in any other printed format. These often represent the only known remaining versions of the reports. Although they are still quite legible, the poor print quality makes their digitized characters difficult for optical character recognition. That’s why we need you, our volunteers, to help us to provide accurate transcriptions of these original documents and ensure full-text searchability for this new collection! Many of these reports have never been seen by the public, and they provide a fascinating look at the history of U.S. and foreign law and policy, particularly from the Cold War era. Visit crowd.loc.gov to explore this historic collection and try your hand at transcribing a report.

Note: these reports are provided for historical reference purposes only. They do not constitute legal advice and do not represent the official opinion of the United States Government. The information provided reflects research undertaken as of the date of writing and has not been updated unless specifically noted.

USCongress.News is NOT a US Government affiliated or sponsored website.

We have created this site to aggregate news, via RSS feeds, provided by Congress, Representatives or Senators.